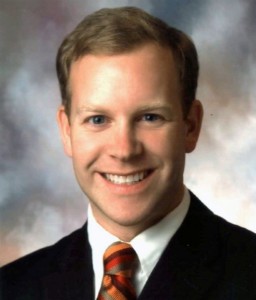 Hunter Kitchens, a 2003 graduate of New Albany High School (NAHS), is currently an Associate Attorney at the King and Ballow Law Firm in Nashville, Tennessee.

Kitchens is the son of Charles and Bev Kitchens.  He was an honor graduate and was inducted into the NAHS Hall of Fame.  Kitchens earned a Bachelor of Science in Civil Engineering from the University of Mississippi in 2007.  Immediately following college, Kitchens interned with Senator Trent Lott in Washington, D.C. and it was that experience that led him to eventually pursue a career in law.  Kitchens was associated with the Pickering Architectural and Engineering Firm in Memphis from 2007-2008.

Kitchens earned a Juris Doctorate from the Mississippi College School of Law.  He completed internships with the Mississippi’s Attorney General’s Office; the United States’ Patent and Trademark Office (USPTO) in Washington, D.C.; and the Madison County Public Defenders’ Office.

King and Ballow, founded in 1969, specializes in a wide array of legal sects.  Kitchens’ practice areas are construction, labor & employment, and intellectual property.  Kitchens is licensed to practice in Mississippi and Tennessee and before the USPTO.  “I wanted to work in a mid size to small firm that offered an opportunity for me to practice construction and intellectual property law so to utilize my engineering degree with my USPTO license as a patent attorney,” Kitchens explained.

Kitchens says that there were several influential experiences at NAHS that helped cultivate his college experiences and his young career.  Kitchens gives much credit to current NAHS teacher Alicia Robinson and the experiences he learned from Speech & Debate and Mississippi Youth Congress.  “This was the first time I tested out my ability to research and give an opinion on real, pressing issues,” Kitchens said.

He also credited retired high school educators Carolyn Houston and Pete Cobb.   “Mrs. Houston emphasized diligent preparation, review, and perfection, while Mr. Cobb requiring students to think and answer for themselves.”  He noted the lessons learned while participating in high school football, soccer, and baseball such as leadership, determination, tolerance, and social skills have been valuable to him throughout college and starting a career.