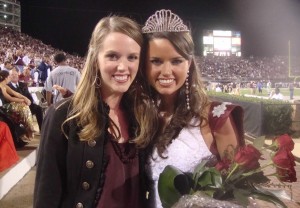 It is unlikely for parents to have a daughter to serve as homecoming queen at a state university.  But Bill and Beth Parks have had the unusual and memorable experience of both of their daughters being Mississippi State University’s Homecoming Queen.  Their youngest daughter Anne Elise was crowned Homecoming Queen on October 23, 2010 while oldest daughter Sara Beth was the 2006 Queen.

Anne Elise graduated from New Albany High School in 2007 and Sara Beth is a 2003 graduate.  The sisters were softball players, cheerleaders, cast members in the school musicals, and very involved in school clubs and organizations.  Both were named to the New Albany High School Hall of Fame and received many honors throughout high school.

Sara Beth graduated from Mississippi State University in 2006 with a Bachelor of Fine Arts Degree with an emphasis in Graphic Design.  She now is employed with Holland+Holland Advertising in Birmingham as the Art Director.  Anne Elise will graduate in the spring with a degree in Geoscience with a concentration in Broadcast Meteorology and a minor in Communication.

Looking at their list of honors, awards, and involvement, one might say they were very much alike.  The sisters say they are alike because they love music, dance, sports, and spending time with family and friends.  But there are some differences.  Sara Beth said Anne Elise is math and science oriented, while she has a passion for English, history, and art.  Sara Beth also described Anne Elise as more laid back and more organized than herself; while Anne Elise said her sister pays more attention to detail and is definitely a healthier eater than herself.

The older sister gives much credit to New Albany High School for helping her choose a career in the art field.  “I always had a passion for art but didn’t realize that I could really make a career out of it until high school,” said Sara Beth.  “Mrs. Lee Ann Thompson was great to bring in guest speakers that had art majors and backgrounds and were working and using their art in different ways for a living.”  It was Thompson who urged Sara Beth to consider Graphic Design.  “I don’t think people realize how special our art department is at New Albany High School,” explained Parks.  “Most people that I majored in Art with at Mississippi State didn’t come from strong high school programs or have the same opportunities in that way.”  Sara Beth said she also felt well prepared for her college history and English classes.

Anne Elise said her involvement with the Journalism class and its production of “In the Dawg House” sparked an interest in broadcast journalism.  Her sister encouraged her to check out the Broadcast Meterology Department at MSU because Anne Elise has always been fascinated with storms and severe weather.  Anne Elise felt that she was well prepared for math as she developed a sound understanding at NAHS.  She also said that she felt most prepared for College English more than any other class noting that taking Advanced Placement English classes all four years at NAHS helped make all of her College English Classes easy.

The sisters said their experience at New Albany High School prepared them for what was to come at Mississippi State.  They felt prepared both educationally and for life as a whole.  The variety of people they were able to go to high school with, play sports with, and be in class with helped them to learn how to relate to others.

Sharing the honor as Mississippi State University Homecoming Queens is one they will never forget.  For both to share the honor of walking down Scott Field to the same song playing from “The Famous Maroon Band”, wearing the same cape and the same dress, and being escorted by their father is a memory the Parks family will always cherish.  To represent the University that they and their family love is a humbling experience for both.

They are both appreciative to their family, friends, and the New Albany community for the encouragement given to them when they were selected as MSU Homecoming Queens.  “I would like to thank New Albany and the community for the support offered to me during this special time,” said Anne Elise.  “I was blown away with all the New Albany people who were at the homecoming game.  There were even avid Ole Miss fans who bought tickets and came.  That means the world to me.  New Albany is definitely a special place!”

“We can’t thank our parents enough for everything they have done for us, for putting us through college, for allowing us to have the opportunities to really be involved at Mississippi State, and for supporting us,” said Sara Beth.  “Mom spent tons of time getting us both reading for homecoming week and for the big day, and Dad was perhaps the biggest celebrity, since he got to walk us both down the field.”