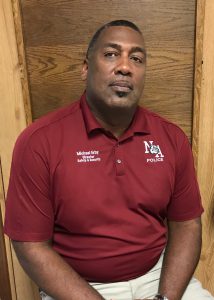 The New Albany School District (NASD) is making a bold commitment to continued safety and security in its schools.

Erby has twenty years-experience in law enforcement and will also serve as the School Resource Officer (SRO) at the Alternative School.  He began his duties in July and continues to work toward the safe school environment goals of the school district as well as those of the School Safety Task Force that was established by Governor Phil Bryant.

Bryant established the task force this past summer to study shooting threats, prevention, and response.

In a presentation to the New Albany School Board of Trustees on August 30, Erby told those in attendance that he is excited to be a part of the district and is already working closing with the three SROs within the NASD to do the following:

“Our job is to minimize the vulnerabilities in the schools and to make the district a hard target,” he stated.

Erby also discussed an app called “STOP IT!”. This gives students an opportunity to anonymously report any potential destructive behavior of students, faculty, or the community. He plans to develop a campaign so that students are aware of how to report activity so that it can be monitored and investigated by him and the other SROs.

For many years, the school district has been a recipient of the Mississippi Community Oriented Policing Services in Schools (MCOPS) Grant which provides funding for a small portion of SRO salaries.

Evans added that he appreciates the work of Chief Robertson, Mayor Kent, and the Board of Alderman who have committed to making this possible within our schools.

“The presence of a trained, experienced, armed SRO on each of our campuses has added a much higher degree element of safety to our schools,” explained Evans.  “It is a financial commitment to safety and security by our school district, our local police department, and our city.”