The New Albany School Board has recently approved several administrative hires within the school district.  The board approved Matt Buchanan as Principal of New Albany High School and April Hobson as the Director of the Career & Technical Center.  Grant Goolsby was hired as Assistant Principal at New Albany Elementary School. John Ferrell was named Assistant Superintendent. 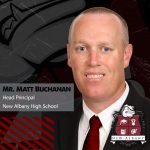 Matt Buchanan will replace Ferrell as Principal of New Albany High School.  Buchanan comes to New Albany from the Rankin County School District where he has served as Assistant Principal of Northwest Rankin High School for the past seven years.  Prior to being the assistant principal, he served as transportation director for Brandon High School.  In his earlier career, he was a math teacher and a basketball coach at Northwest Rankin High School.  Buchanan is a graduate of the University of Southern Mississippi with a Bachelor of Science in Mathematics Education and holds a Master’s degree in Educational Leadership from the University of Mississippi. 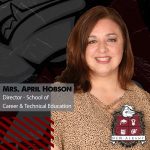 April Hobson replaces Rodney Spears, who retired in March, as the Director of Career & Technical Education.  Hobson comes to the Career & Technical Center from New Albany Elementary School where she has served as Administrative Support and Counselor for the past seven years.  She also served as counselor at New Albany High School and the Career & Technical Center from 2010-2014.  Before serving at New Albany School District, Hobson was a teacher, counselor, and special populations coordinator in the Clinton, Tate County, and South Panola school districts.   She holds a Bachelor of Science in English Education from Delta State University, a Master of Science in School Counseling from Mississippi State University, and an Education Specialist degree in School Counseling from Mississippi College.  She is a National Board Certified Counselor and has her Administrator License. 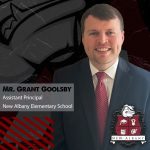 New Albany Elementary School will also see some administrative changes in the 2021-2022 school year.  Grant Goolsby will be the new assistant principal at New Albany Elementary School.  He replaces Dr. Christopher Hill who has accepted an administrative position in another district.  Goolsby has educational experience as a math and physical education teacher and a basketball coach in the Oxford, Union County, and Baldwyn school districts.  He received his Bachelor of Arts in Mathematics Education from the University of Mississippi and his Master of Science in Educational Leadership from Arkansas State University. 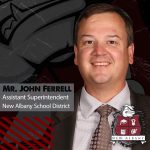 John Ferrell will work at the District’s Central Office as Assistant Superintendent. Ferrell has served as Principal at New Albany High School since 2017.  He has experience as an English teacher, assistant baseball and football coach, assistant principal and the Director of Career & Technical Education in the New Albany School District.  Ferrell received his Bachelor of Science degree in Political Science and English Education, as well as his Master’s degree in Educational Leadership from the University of Mississippi.

“We are pleased to be able to fill these positions with these outstanding educators and administrators,” said Dr. Lance Evans, Superintendent of New Albany Schools.  “We are confident that the administrative changes we have made will allow our school district to continue to prepare all for success.”